He died this morning. I came out of the bedroom to start bunny breakfast and saw Raisin in his pen, on his side. I wrapped him in a blanket and put his stuffed bunny behind him for support. Told him he was a good boy and it's ok. I sat with him for a few minutes. Got up to call the vet and start bunny breakfast again, I think that is when he died.

He was one of the best bunnies we ever had. To me, he was also the prettiest, he was a Silver Martin.

He was bonded with Jasper, who died last year of something similar. Both were super sweet and mild mannered buns. They were not afraid of anything. I kept them (they did start off as fosters) because I knew they were special and I was afraid if they were adopted they would be separated.

They came to the shelter a mess. Skinny, dirty and stinky. They lived in our dining room with lots of light and space to play.

We did everything we could over the last few months to get Raisin better. I took him to 3 vets, even spoke to a 4th in California. 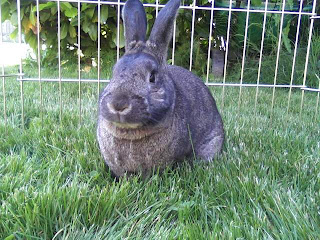 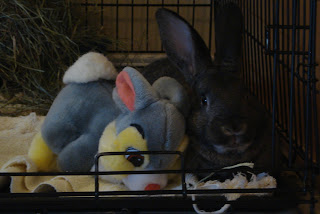 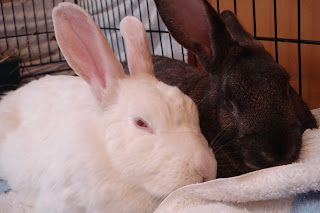 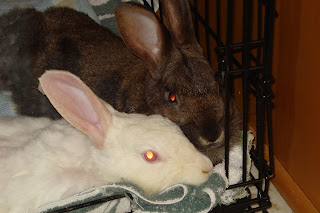 I hope he is with Jasper now. We love you Raisin Man. I love you to the moon and back.

Special thanks to Angie at Special Bunny , Cat at Zooh Corner and Christina that volunteers at Heartland Rabbit Rescue.

So much has been going on the last few months, and I haven't had time to blog about any of it. Mostly what has been keeping us busy is Raisin. He has been sick for months, with a mass in his gut. We have been to many vets, had lots of tests, meds and nothing seems to help. Most recently he had an enema, which seems to have moved the mass, maybe even shrunk it, but it is still there. Now we need to concentrate on getting some weight back on him.

I am making a scrapbook with my neice, she comes over once a week. She will frequently take breaks and visit the bunnies, always sitting down with Raisin. He loves the attention he can get from anyone. 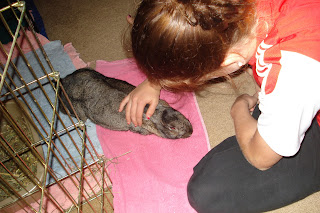 Raisin has also been hanging out with Dora during the day. She is pretty active, and Raisin is not, so they are not together all the time. They get along but aren't quite bonded, seems she could take him or leave him. 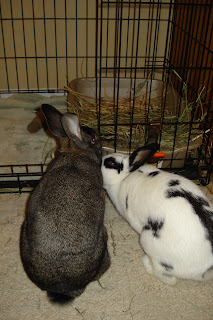 Posted by Friend of the Animals at 8:59 AM 2 comments: 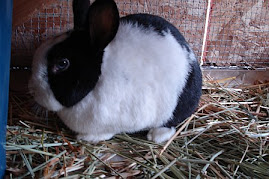